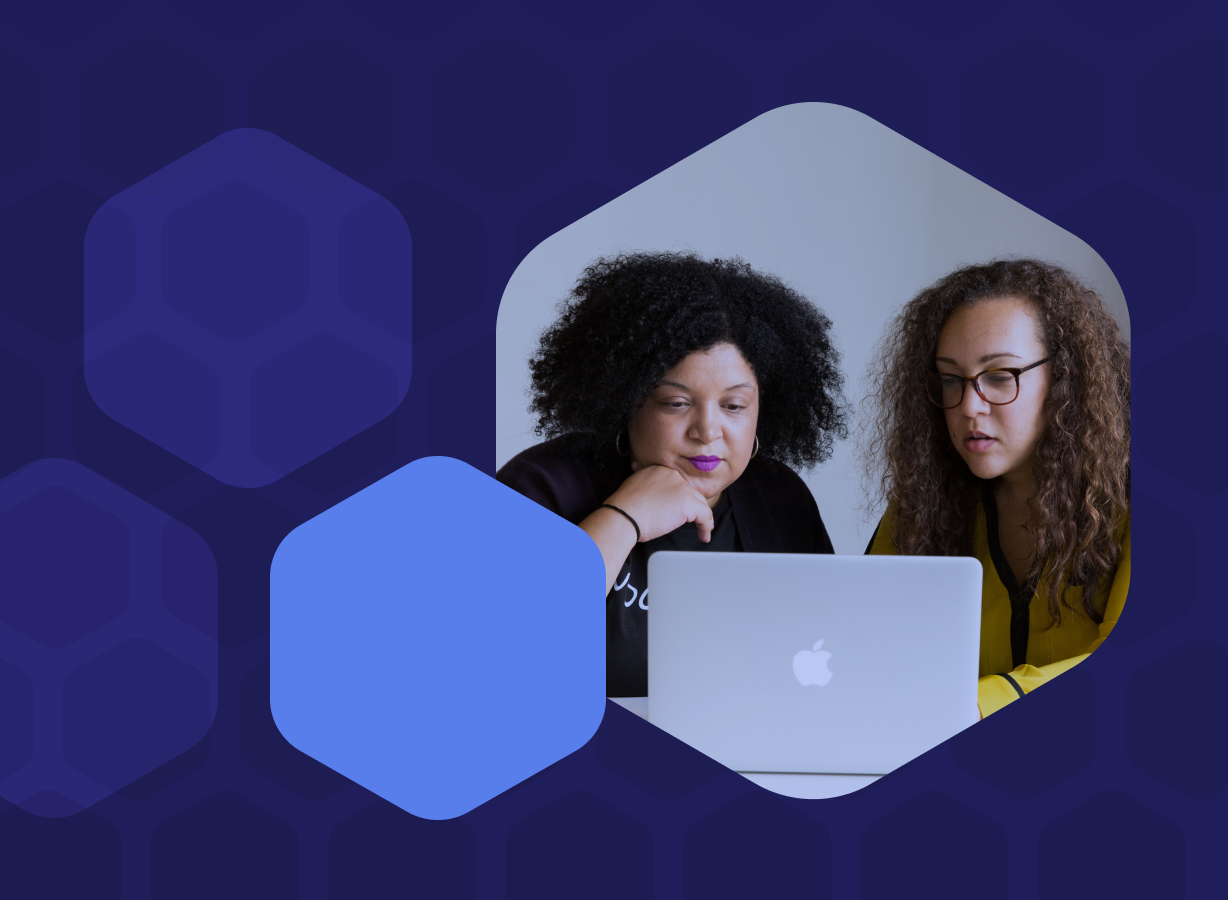 We tried to bring answers to some of the questions you shared with us around DE&I in talent acquisition and beyond.

We recently held a webinar titled “Diversity, Equity and Inclusion: Why You Are Solving The Wrong Problem”, during which we received many thoughtful questions from the attendees, some of which we are resharing below. DE&I is an important challenge for every company, and has been for decades—no one has a single right answer. However, we have been making progress as an industry, and identifying what hasn’t worked in the past and why, and what we can do differently today.

You can listen again to the full webinar here: we discuss the importance of having a centralized DE&I strategy stemming from the highest level of executive leadership, and how Talent Acquisition teams can support that central vision within their scope of action. We also touch on the different steps in the employee lifecycle where a great DE&I strategy impacts the individual. 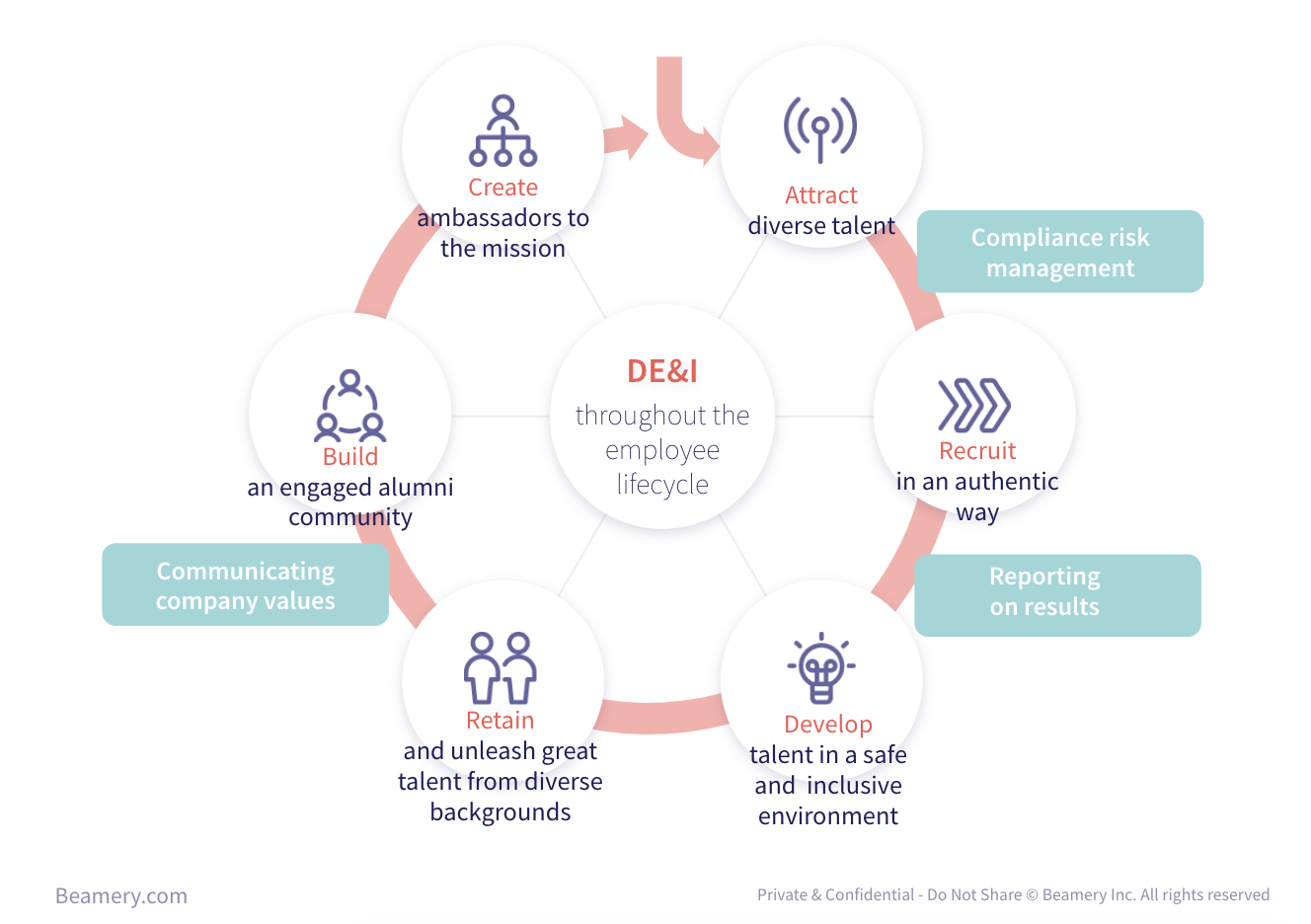 When it comes to DE&I, what do global companies look at besides gender outside of the US?

This really depends on the companies: their size, the geography where they operate and the legislation that governs it, the predominant cultures in these companies, not to mention whether they are private or public businesses, or even part of the public service and managed by a government. Depending on this, they might consider inherent diversity factors, such as race and physical appearance, sexual orientation, gender and gender identity, religion, or disability, as well as factors that are learned, such as culture or educational background.

It’s also important to remember that not every company agrees internally on a common definition of terms such as Diversity, Inclusion, Equality, or Belonging. For the purpose of our internal conversations at Beamery, we define these terms as follows:

Diversity - Representation of difference experiences/perspectives within a collective group

Inclusion - Collective environment, where individuals empowered to speak up to share their experience/perspective

However, each organization must be very clear on their own definitions before they attempt to take them to a new territory.

This also brings up another point. We’ve seen some customers struggle with extending their DE&I initiative to new regions because they didn’t think about the different approaches to these same issues when they were going into new territories. For example, when going from the US to english-speaking countries in Europe, some talent teams make assumptions that end up costing them, using terminology that is not relevant outside of the US, for instance (e.g. African American instead of Black) or assuming that US laws must be similar to EU ones (e.g Affirmative action-like policies are more around geography than race in certain European countries).

What does the research say as to who should be in charge of D&I in our companies?

There are a few different governance models in place for Diversity, Equity and Inclusion in business today. For example, many companies have a separate task force, or council, for implementing DE&I initiatives, usually headed by the CHRO, or sometimes even the CEO. In other companies, it’s more of a local remit where different teams and functions are tasked with implementing practices that support diversity within their own scope.

While we haven’t seen any research that clearly shows which governance model yields the best results, there are definitely indicators that initiatives that are guided by a central, unified vision, work best. Within our customers, the ones who were most successful at implementing changes were the ones who relied on a single, clearly articulated set of goals that are common to the whole company, and not specific to the recruiting organization, for example. This doesn’t mean that these goals should be implemented locally in the exact same way everywhere, however—quite the opposite.

There are documented cases on the different challenges that can come up when an international organization tries to achieve a common goal by applying the same exact practices in all of its territories. This research report published by the CIPD shares examples where local culture or legislation must be carefully balanced with the vision from headquarters. For example, a Danish-based company who had well-embedded diversity and inclusion values in its headquarters, found some resistance in its Saudi Arabia offices. You can find more examples of similar cases here. The answer here is probably not in expecting Saudi employees to react to the same policies the same way Danish employees do.

What impact does DE&I have on innovation, and how can you measure it?

There has been a decent amount of research on the link between diversity and innovation. In general, it is thought that a diverse body of decision-makers brings more ideas to the table, and promotes out-of-the-box thinking. The corollary to this must be, of course, that these diverse opinions are all considered on their merits, and not affected by biases against the individuals suggesting them.

For example, according to this study, companies whose leaders are themselves from a diverse background, but who also have exposed themselves to diverse thinking, are more likely to grow their market share or capture new markets. You can find here examples of business areas that are thought to be most directly affected by the company’s ability to innovate: product development, customer service, and recruitment. The company can measure the impact of diversity on innovation by directly monitoring the performance of these functions in relation to how diverse and inclusive they are, for instance.

The quality of any analysis depends from the quality of data your talent acquisition system has in place. How do you think diversity information should be collected for the purpose of improving DE&I initiatives? Should it be added in by candidates? By recruiting teams?

This is a delicate question. Beamery operates in many geographies with very different regulations around data privacy, data management, and so on. What you can collect about a candidate, where you can store it, and who can have access to it and for what purposes, depends heavily on where the employer is based and the countries from which they recruit.

It is true that without transparency into what happens in the hiring funnel, for example, the company cannot address its challenges in attracting and engaging diverse talent. Similarly, without knowing if there are correlations between DE&I practices and business performance, it can’t identify opportunities for growth. So should we then ask candidates to identify their race, their gender, their religion or political beliefs?

In some cases that is simply illegal, so the question is neatly resolved. In others, even if it is technically legal to collect such information, it might not have the desired effect, because your recruiting team might be tempted to label these candidates and not engage them in the way they want to be engaged. They might also be incentivized to put less effort into investigating candidates that do not fit their diversity goals, and therefore deprive the company from great talent by doing so. That is not what DE&I strategies aim for–quite the opposite. 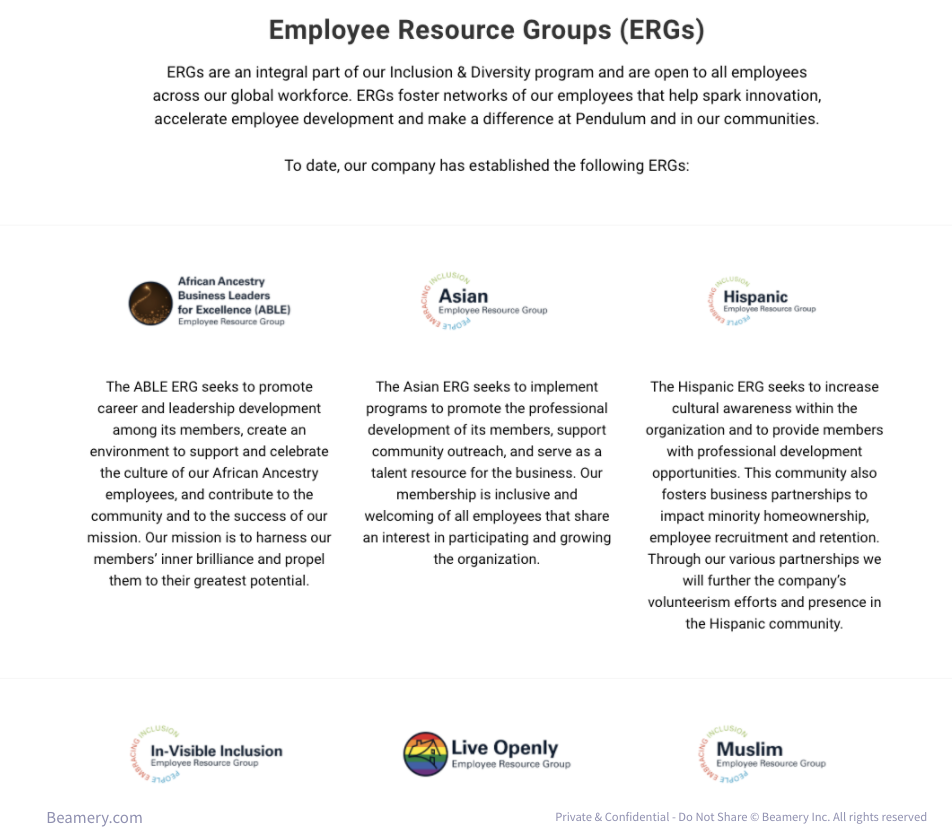 What we’ve seen some customers do is allow candidates to self-select into affinity groups or employee support groups, which gives the organization an indication of the subjects they’re interested in. They might not identify as LGBTQ or Muslim or as a Veteran, but if they are interested in learning about what the company does to support these groups, then that is indicative of their openness to a diverse and inclusive environment. This approach also has the significant advantage of allowing recruiters and people teams to interact with both candidates and employees in a much more relevant way: by relying on their proclaimed interests, and not on a single limiting label applied to them by a drop-down menu.

DE&I is a global business initiative, and cannot be limited in scope to one function. However, the People team, and especially the Talent Acquisition team, can have a direct impact on many aspects of it internally.

Having the right technology in place, and understanding all relevant legislation around DE&I questions is only part of the solution. Companies need to make a more concerted effort at the top to clarify their fundamental beliefs and to lay down bold objectives, and then empower their teams to outline clear steps forward to reach these objectives.

Want to find out more about Beamery?

Thanks, we look forward to meeting you.