Paradox will be speaking at Spark Live 2020 as part of our Future Of Work panel discussion, "Transformative Talent Technology: What are the Barriers to Impact?". Don't miss it, secure your free spot at www.sparklive2020.com

I bought something online recently. That, in itself, isn’t interesting. Millions of people do the same thing every day. And my wife would argue that I do it more frequently than all of them, combined. I’m not great at math, but even Warren Buffett doesn’t have that kind of cash.

What is interesting are the things that happened before and after I clicked “complete purchase.”

See, the whole transaction started with a text message. I’d opted into this retailer’s SMS list a while ago and, if you’re like me, you can’t resist those little red notification bubbles that indicate you have an unread message. So, when this retailer sent me a message about its new boots, I opened it. I read it. And I clicked through to their website.

When I got there, I was greeted by a conversational AI assistant who could answer questions about the boots. How do they fit — on the narrow or wide side? Are they waterproof? Is the brown leather more of a tan or a mahogany?

Five minutes later, I was the proud owner of some sweet new lace-up chukkas.

An hour after that, the retailer sent me a text letting me know the boots were packed up and sent out for delivery. Two days later, I got a text saying it was on a truck, en route to my house. And a week after the shoes landed on my doorstep, I got a text asking to leave a review about my experience.

Obviously, I gave it five stars. 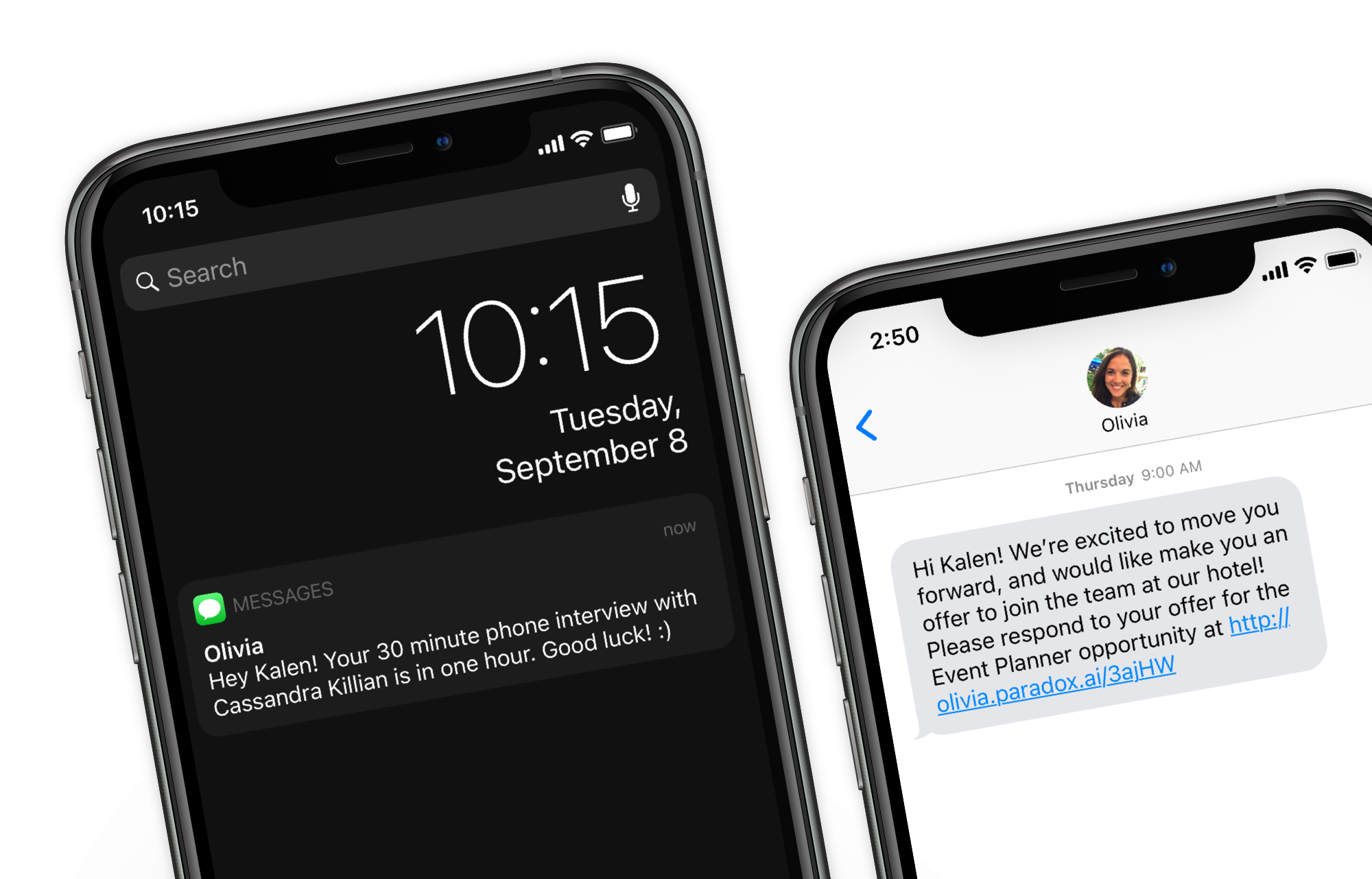 If It’s Not Obvious Already, We’re Living in a Mobile World

Apparently I’m not the only sucker for a smooth, simple, seamless experience.

Behavioral psychologists — and app creators — have studied the phenomenon of mobile messaging and chat for more than a decade. In 2016, Gartner found that text message open rates can reach 98% compared to 20% for email and other channels. And mobile messages don’t just get opened — they drive higher conversion rates than most other channels, too. See: my new boots.

There’s just something about that little red bubble on our messaging app we can’t resist.

But there’s also something incredible about the simplicity and ubiquity of messaging. It’s short and easy. It’s not as noisy as our email inbox. It’s immediate and conversational. And it’s also incredibly useful for a bunch of forms of once-cumbersome communications.

I could go on, but you get the point.

The little bricks we all carry in our pockets are just how we communicate today. And, increasingly, it’s how we expect companies to communicate with us. Not just to send us alerts about new products or political ads we don’t remember signing up for. But to help us get things done through a conversation.

But What About Recruiting?

I’m 400+ words into this blog post and none of it’s had anything to do with recruiting. That either means I’m super wordy or I’m trying to make a point.

While the world around us has fully embraced new ways to leverage messaging and chat to nurture customers and drive engagement before and after purchase, I’ve found that our world — recruiting and talent acquisition — tends to think about it more narrowly. Specifically, we tend to think about “chatbots” and text messaging as one-way tools to perform incredibly basic tasks.

In reality, this technology has the potential to be transformative.

Let’s think about all the things that drive candidates — and recruiters — bonkers about the recruiting process. Here’s my short list:

A candidate — let’s call her “Alicia” — comes to your career site and meets a friendly AI assistant let’s call her “Olivia”, who answers Alicia’s questions about the company culture with a video from the CEO. Alicia asks a follow-up question about open engineering jobs and Olivia — automatically recognizing Alicia’s location via IP address — sends some job matches in the chat.

Alicia doesn’t find a job she’s interested in, but tells Olivia she’d be happy to join the company’s talent network.

A few months later, a job opens up that matches Alicia’s background and your recruiting CRM triggers a text message campaign to gauge her interest. The good or bad news: Alicia had a rough day at work — and now she’s interested. She opens up her phone and responds: “Hey Olivia - I’d love to learn more.”

From there, Olivia — our friendly AI assistant — kicks into screening mode by responding with some follow-up questions to learn more about the candidate. Are they willing to relocate? What’s their timeline for considering a change? Do they have experience with Ruby on Rails?

Alicia checks every box — an immediate green light to schedule her for a pre-screen interview. Olivia suggests some open times for the interview and Alicia picks one. Olivia sends calendar invites to Alicia and the recruiter, and she sends a reminder a day before the interview with tips on how to prepare.

Alicia aces the interview and her follow-up with the hiring manager. A few days later, a recruiter calls her to extend a verbal offer. After she accepts, Olivia responds immediately with messages to help Alicia prepare for orientation and onboarding. 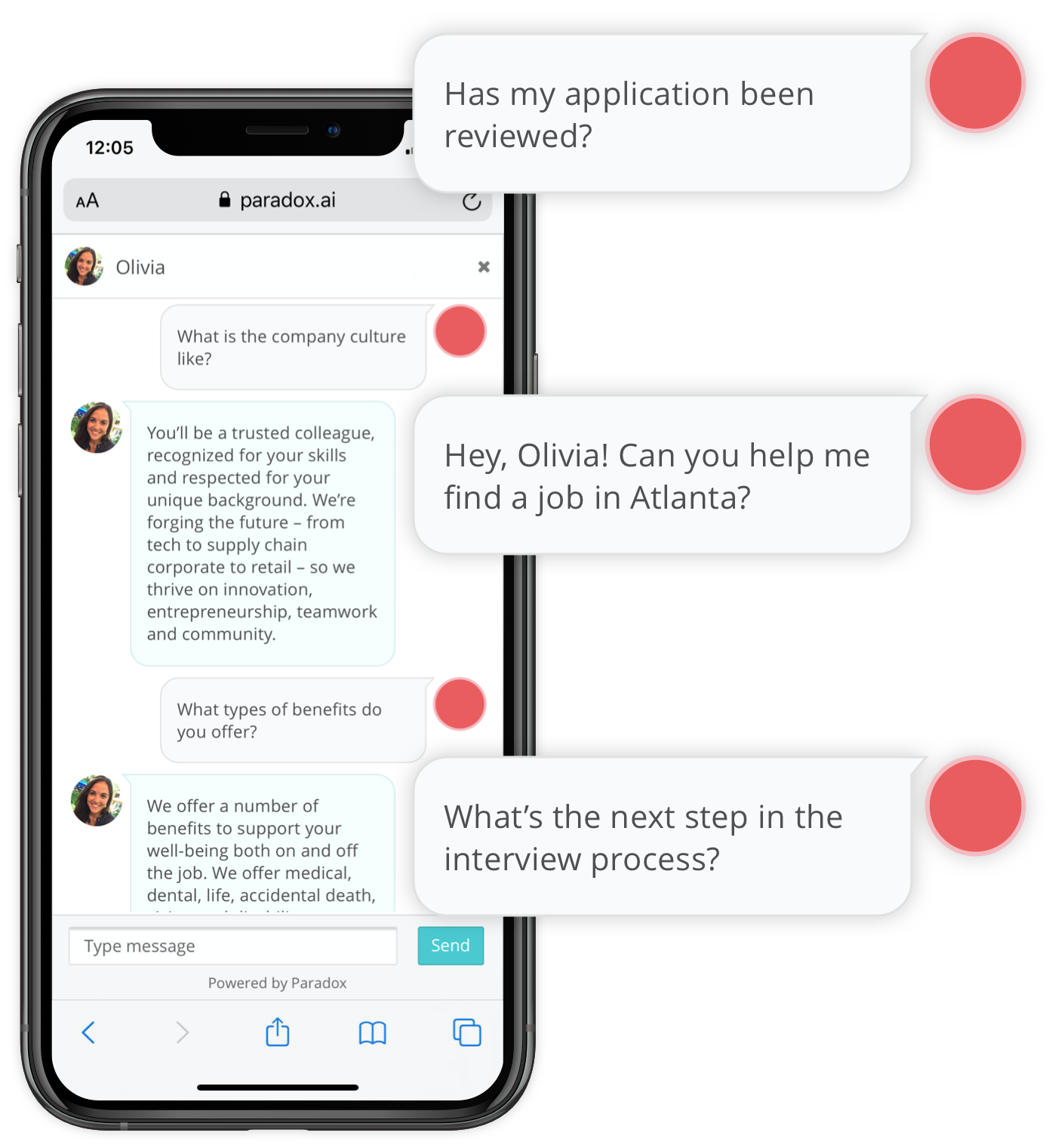 It’s About Conversations, Not Transactions

Over the years, there have been two big obstacles to delivering candidate experiences like the one above: technology and time. Most recruiting technology was never designed for elegance, intelligence, and speed. And most recruiting teams simply don’t have the time to provide that kind of white glove experience on their own.

But neither of those are good excuses anymore.

We have the technology. And with that technology, we can give recruiters back enormous amounts of time that can be spent on far more productive activities. Imagine a recruiter taking the hours they save on sourcing and screening and instead investing it into running better hiring manager intake meetings, writing better job descriptions, or providing more transparent feedback to candidates who didn’t get the job.

Those are things only humans can do. And when humans have time to do them, that’s when we’ll start to really move the needle.

But to get there, we have to stop thinking in terms of transactional, one-off messages and instead think about the power for conversational technology to fully engage candidates wherever they are, with whatever they need. The latter feels bigger and bolder and more useful because it is. It conveys the feeling of a concierge-like experience, because that’s exactly what you’re giving someone. When we begin to think with that frame, it takes a sledgehammer to the experiential barriers that have always stood in our way.

This isn’t about trying to patch over a broken process with a new communication channel. It’s about transforming that process by giving candidates the power to have a conversation whenever, wherever, and however they choose — and having technology that makes that experience as elegant as buying a pair of boots from your favorite ecommerce shop.

It’s about flexibility and speed. Transparency and communication.

It’s about picturing what you wish your hiring experience looked like — and having the tools to actually create it.

Rise of Talent Operations: The Ebook

Enterprise talent teams on the road to transformation need the operations function. Discover what it is, what impact it can have on the business, and how to build it from scratch.

Beamery will be holding its third annual summit, Spark Live 2020, on November 12th.

The Real Meaning of ‘Bad Data Quality’ and Why it Matters

We know that data quality has a significant impact on businesses.