How To Write Perfect Follow-Ups And Break-Up Emails

You hit send, sit back and wait. Then nothing. The majority of your emails are destined to never get a response.

You shouldn't take this personally, people are busy and your message is unlikely to be number one on their priority list.

The recruiters that have the most success are the ones that understand the power of the follow up.

It’s the part of the race when most other people stop running, and you’re the only one left. It doesn’t matter how slow you run, you're going to win because everybody else stopped!

Why you avoid following up

Like every great salesperson, every great recruiter knows the power of the follow up. It’s often the key to messaging candidates on LinkedIn.

Despite this, the follow up often doesn’t get the attention it deserves.

There are 2 key reasons for this:

i No one wants to appear pushy

It’s easy to tell yourself if the person really wants your job, they will reply themselves. Fall into this mindset, and you may feel pushy following up.

ii  No one likes getting rejected

If your attempts at following up are unsuccessful, it’s not uncommon to suffer feelings of rejection. Studies show that rejection affects the human brain in the same way as physical pain, understandably something recruiters would want to avoid!

There are a number of legitimate reasons why a candidate hasn’t replied to your message.

For starters, they’re busy. Replying to your message probably isn’t their top priority, particularly if they already have a job!

It’s also equally possible that they didn’t see your first message. Top candidates have a pretty full inbox, your message may well have gone unnoticed.

Most people assume that the reason they get a response on the 2nd or 3rd email is because they've written something more engaging.

More often then not, the real reason why people respond to your follow-up email is very simple: timing!

Your original email came through at the wrong time. Your target candidate was too busy or distracted to take action and reply. Silence does not mean no!

Note that one of the reasons passive candidates are less likely to reply to cold emails is that they're busy a higher proportion of the time - they're working and haven't dedicated any mental energy towards a job search!

Your follow up email got a reply because it came through when the candidate had time to consciously process and respond to it. That's all.

Now, if it's that simple you might ask why you even need to send a follow up email. Shouldn't the candidate just go back to your first message when they've got a little more mental bandwith free?

Sadly not. Emails have an incredibly short lifespan.

This makes your follow up incredibly important. The moment you send your email the clock starts ticking, and after 24 hours you know its pretty unlikely that you'll get a reply.

Never stop following up. It's as simple as that.

If you’ve already had some kind of interaction with the candidate and that interaction was not a clear NO, then follow up as long as it takes to get a response.

Research clearly shows that follow up emails even by email 10 get results!

If your first message was completely cold and you have never had any interaction with the candidate, follow up once or twice, you really don’t have a relationship that gives you permission to contact them

While you might get a response, you're more likely to end up as an irritation and provide a poor candidate experience.

Timing is the key to any great follow up campaign. You want to consistently appear in the candidate's inbox without overloading her and becoming an irritation.

This can be tricky to work out, so we've put together a simple follow up formula that you can borrow.

Every company and candidate is different, so I'd recommend testing this out and seeing if the frequency works well for you. After a little testing you should be able to settle on a schedule that gives you great results.

What should you write?

If your prospects read your initial email, you can check this using Beamery's email tracking integration, and decide they’re not interested in your company, then nothing you say in a follow-up email is going to turn that around and convert them!

This makes following up simple.

Instead of spending time crafting entirely different messages, just send over a slightly modified version of your first email.

Your goal should be to communicate the same message, just in a slightly different format.

Lets look at follow up 1 and follow up 2 arguably the most important given the higher chance of a response.

If your first email was several paragraphs long, reduce the follow up email to two sentences. If your cold message was just two sentences, try a longer email.

Don’t even explain anything. Just succinctly restate your call to action.

Ask the candidate to schedule a call, take a look at your opportunity or to respond to your email—whatever your desired call to action for your initial cold email was.

Try: “Hey, when would be a good time for you to discuss this on a short 10-minute call? How about Wednesday or Thursday 2 p.m. ET?”

The break-up email is a secret weapon that can help you kickstart the candidate conversation.

It’s an email in which you say 'goodbye', and hope that the candidate's loss aversion kicks in. This a psychological principle describing people’s tendency to strongly prefer avoiding losses to acquiring gains.

It's best to use the break-up email as your final message to candidates who have never replied to your cold email. For people you've interacted with, the follow up never stops!

The best break up emails have a simple structure:

Take a look at our example below:

Remember, the candidates that you send this email to are totally unresponsive, so you shouldn't expect a huge spike in replies.

What I can guarantee though, is that purely because it's a little different this will get more replies than a standard template.

Simply doing things that other recruiters aren't is a great way to get better talent through the door.

Sending a break up email is a great way to stand out to unresponsive candidates but, if you really want to differentiate yourself, you could try adding a touch of humour to your final email.

Take a look at our example below:

This style of email may not fit with your company ethos, particularly if you work at a large corporate.

If you do have the freedom to experiment though, it recommend trying out humour in your break up emails I know I'd probably reply to our example above!

Talent teams of every size can find value in this ebook, but it is especially targeted at sophisticated teams who want to leverage the technology and candidate data at their disposal to create highly effective event programs. It contains an exploration of the different types of events and how to best use them, checklists for event set up, project management tips, collaboration, event follow-up, not to mention metrics and best practices for measurement. 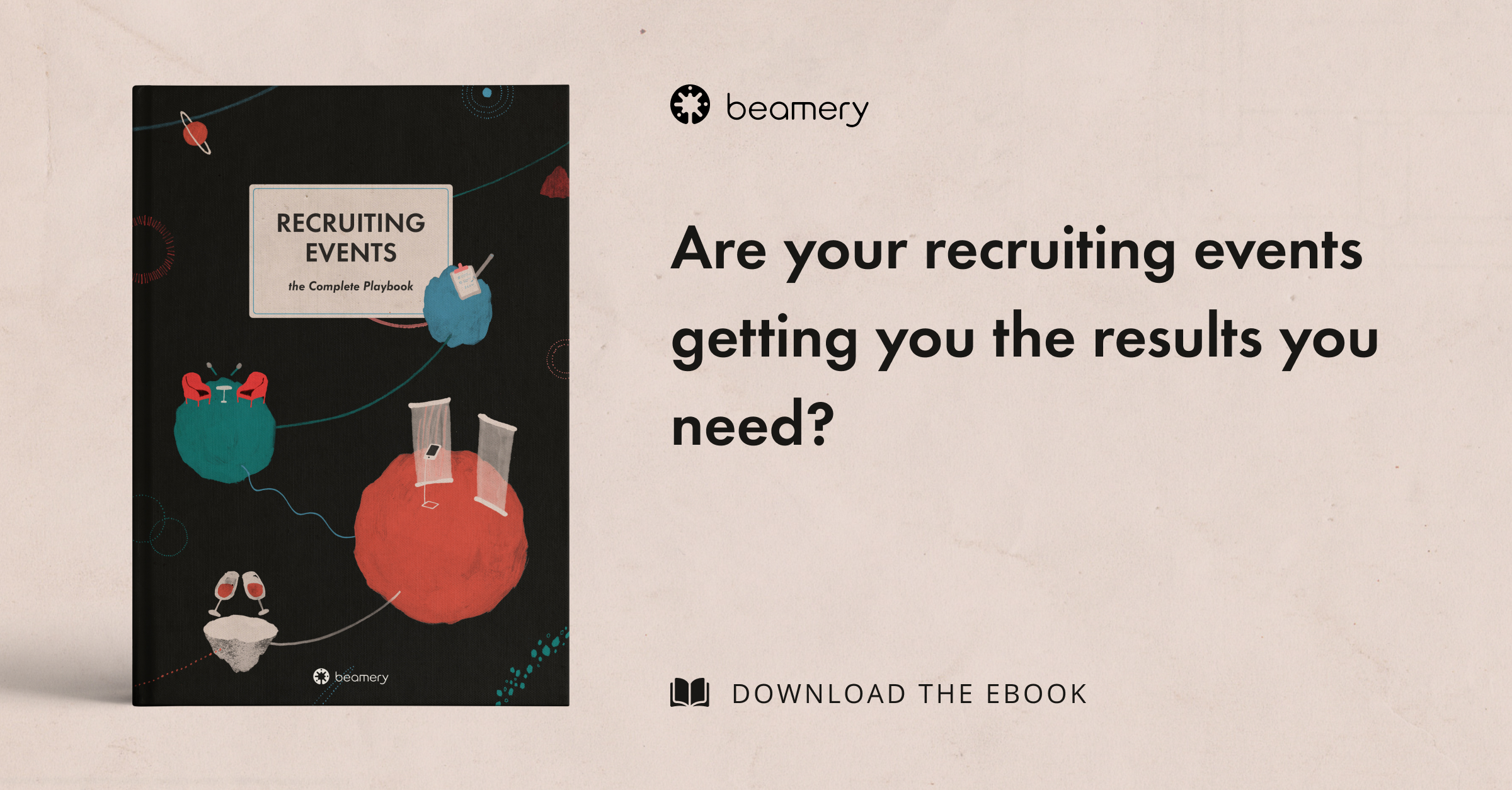 Ben Slater leads marketing globally at Beamery. He typically writes about the future of work and talent transformation.